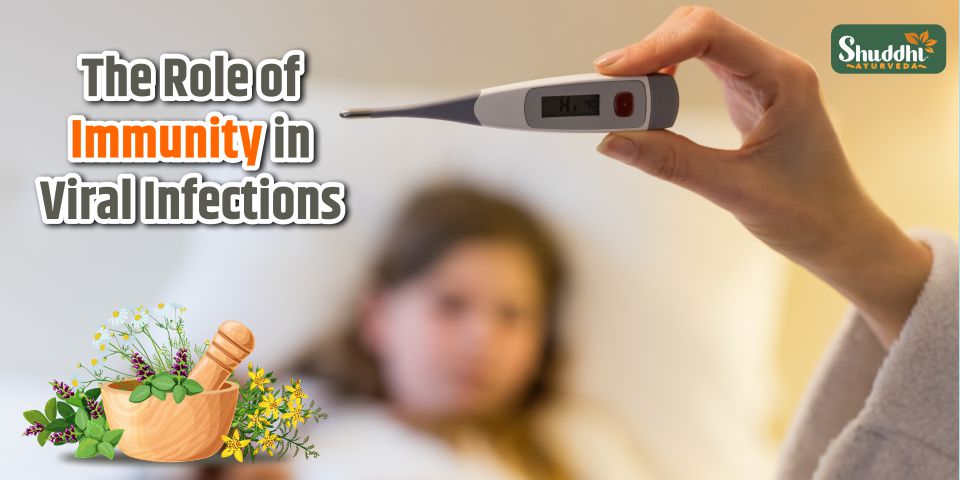 As you know, viral fever, cold, and flu are the most widespread diseases that mainly occur in the changing seasons and affect many people during climate changes. These are infectious diseases that spread rapidly from one to another, and that is why it has been often seen to spread out in the whole family once one is get infected with it.

Viral fever refers to the abundance of viral infections, which raise the average body temperature. It mainly occurs in children and the elderly due to weak immunity. Many medicines are available in the market to treat viral diseases, but those medicines may lead to lots of side effects. Thus, if you want a natural and perfect cure or prevention from viral infections, then home remedies and Ayurveda for fever or viral are proven to be effective and the best treatments.

An immune system protects your body from external invaders, including germs such as bacteria, viruses, fungi, and toxins (chemicals made by microbes). The immune system comprises different organs, cells, proteins, and good viruses that work together.

Many viruses inside your body protect you from viral and bacterial infections. For this purpose, your strong immunity plays a vital role because it increases the number of good viruses to fight against the external aggression of the viruses. For example, a sudden raised temperature of the body (fever) means that good viruses are fighting against the attack of the external virus to protect your body. But on the other hand, weak immunity decreases the number of good viruses and reduces the body’s capability to fight against diseases or viral infections.

So, if you want to be safe from any viral or bacterial infections, it is crucial to boost your immunity. Therefore, Ayurveda is the best choice for you to meet this purpose, which naturally boosts your immunity. Apart from boosting immunity, it also improves the healing capability of the body to heal itself without causing any side effects.

This Can Help You to Identify the Viral Infections!

Most common symptoms of viral fever: –

Some other symptoms of viral diseases: –

As the name suggests, viral fever occurs when you come in contact with the fluids of a person suffering from viral infections. For example, when an infected person coughs, yawns, sneezes or speaks, tiny droplets of liquid that contain bacteria or viruses come out of their mouth and enter your body through the nose or mouth. If you are standing close to an infected person, you will be unaware of it most of the time. Therefore, if you want to deal with the viral to protect yourself from infections, you need to know about the preventions.

Here is a list of preventions given below that may help you out: –

Why Ayurveda for Immunity To Protects From Viral?

Viral fever is a common disease occurring in the changing season, rapidly making people its victims. Sometimes the intense sun and scorching heat coming out after rain causes a change in the temperature, weakening the body’s immunity. There are multiple modern medicines and medications that are widely available to get rid of these infections. But apart from these all, you can easily prevent such conditions by adopting home remedies for viral. So, let’s explore more about the role of Ayurveda and home remedies that may help you to overcome the viral.

Home remedies that may help you overcome viral or bacterial infections are given below: –

It is an excellent remedy for cold & flu that contains numerous herbal substances, which help boost immunity naturally. Moreover, the antifungal properties of this Ayurvedic product prevent skin problems, viral infections, kidney problems, liver problems and protect from deadly infectious diseases. Furthermore, it is beneficial in diseases like heart problems, malaria, dengue, cough, fever and works as a blood purifier. Therefore, utilizing the multitasking product of the Shuddhi, Shuddhi Vish Har Ras, can be advantageous in preventing viral and many more health-related issues.